A bleak description of “American carnage.” A forceful rollback of his predecessor’s achievements. A blatant falsehood from the White House podium.

And that was just the first 24 hours.

In his first year in office, Donald Trump proved to be a singular figure, casting aside norms and traditions, fighting with Republicans and Democrats alike and changing how the nation and the presidency are viewed at home and abroad.

Seemingly each day spawned several can-you-believe-it headlines that would have defined a previous president’s term. But in the hyper-accelerated Trump news cycle, many were forgotten by the next morning.

Appropriate for a former reality TV star, Trump’s first year was can’t-miss drama, full of unforgettable characters, surprise casting changes and innumerable plot twists. It came against the backdrop of a deeply polarized nation, a looming nuclear threat, whispers about the president’s fitness for office and, for good measure, the shadow of the Russia investigation.

The reviews weren’t kind. Trump’s first-year approval rating stood at 39 percent, the lowest of any president. But viewers couldn’t look away. 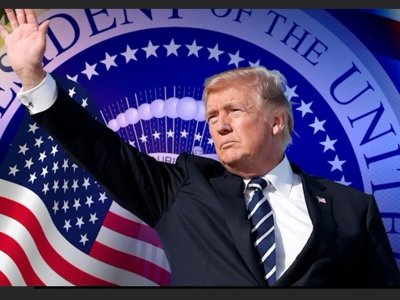 “He is a compulsively watchable political character,” said Jon Meacham, presidential historian and biographer. “The country elected the most unconventional president in our history and he has proven to be just that. To me, the story of the first year is the atmospheric chaos that the president has created, sustained and perpetuated.”

Trump was the first president to be elected without any government or military experience. And from the first moments of Trump’s inauguration, it was clear that Washington had never seen anything like this before.

His inaugural speech was a dark pitch to the nation’s forgotten, suggesting a retreat from the world under the slogan of “America First.” It soon led to an uproar over the White House press secretary’s wild claims about the inauguration crowd size.

Soon, other crowds were the story.

Millions of people flooded streets around the globe for the “Women’s March” to protest Trump’s presidency. That set the template for the so-called #Resistance, which swarmed airports just days later when the White House suddenly announced its travel ban on visitors from several Muslim-majority countries.

There would be little attempt from Trump to bring those protesters into the fold. Despite losing the popular vote by nearly 3 million votes, the president forged forward as if elected with a sweeping mandate, aiming his policies directly at his base — with moves such as the rollback of environment regulations and civil rights protections — and blaming Democrats for any Washington failure.

Always eager to have a foe, Trump governed as he campaigned, and not just by incessantly reliving his 2016 election over Hillary Clinton. Trump frequently instigated fights and rarely let a slight go unanswered via his favorite weapon, his Twitter account.

Any pre-inauguration talk of restraining his Twitter usage was soon forgotten. He used the 140-character — and later, up to 280 — bursts to target foes, traffic in conspiracy theories, salute the programming on Fox News, rattle Congress and unnerve world capitals. In March, he even made the unsubstantiated claim that his predecessor had wiretapped Trump Tower, and he labeled President Barack Obama a “bad (or sick) guy.”

The trail of tweets has roiled the capital for 12 months. Across Washington, phones would buzz with alerts anytime Trump tweeted. Republicans found themselves to be targets of Trump’s tweet just like Democrats, particularly when their efforts to repeal Obama’s health care law — a plan seven years in the making — failed not once, but twice.

Some tweets drew puzzlement; none more than the president’s late-night posting of the nonsensical word “covfefe.”

Some tweets challenged American institutions, full of criticisms of the media and the FBI. Others provoked outrage, as when he suggested that MSNBC host Mika Brzezinski had a face-lift or claimed that Sen. Kirsten Gillibrand, D-N.Y., “would do anything” for a donation, an unsavory insinuation made at the height of the #MeToo movement.

The discussion about sexual harassment toppled many powerful men but, while Trump’s own accusers resurfaced, the White House never changed its story: The women were lying. 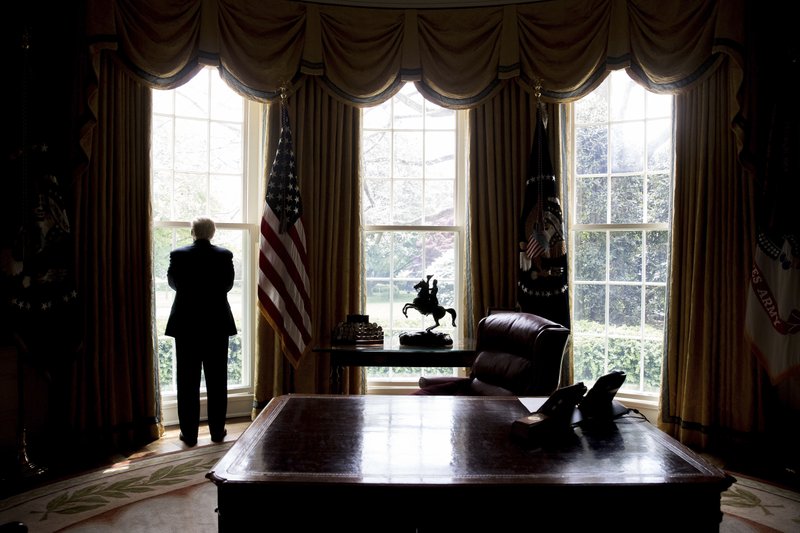 That was just one of many moments in which Trump appeared almost eager to foment divisions, including racial ones.

His political career was launched on the lie that Obama was not born in the United States, and this month, Trump was denounced for dismissing African nations as “shithole countries” when he urged a limit on immigration from that continent.

He dismissed Sen. Elizabeth Warren, D-Mass., as “Pocahontas,” mocking her claims about being part Native American, while addressing a group of American Indians. More divisively, he blamed “both sides” for the violence between neo-Nazis and anti-hate group protesters that left one woman dead in Charlottesville, Virginia.

While Trump was rewriting the rules of behavior within the Oval Office, his agenda was largely lifted from the Republican playbook and his first year victories thrilled the GOP orthodoxy. He appointed conservative judge Neil Gorsuch to the Supreme Court, rolled back business regulations, presided over a massive tax cut and, the White House argued, fostered an environment that freed the stock market to boom.

“2017 was a year of tremendous achievement (and) the achievements for our country, our people, and for our standing in the world have been very monumental,” Trump said at a Cabinet meeting last week, before offering a glimpse into how he views the presidency — as catnip for cable.

“I’m sure their ratings were fantastic. They always are,” he said.

Like any president, Trump faced crises during his first year.

Most ominously, North Korea escalated its nuclear weapons development program while Trump responded with unprecedentedly bellicose rhetoric. He warned of “fire and fury” that could wipe out Pyongyang. At the United Nations, he insulted North Korean leader Kim Jung Un as “Little Rocket Man.” Trump took to Twitter to suggest that his nuclear button was bigger than Kim’s.

The anniversary of his inauguration coincided with a government shutdown, and he scoffed that Democrats “wanted to give me a nice present.”

His responses to domestic tragedies were uneven.

He paid tribute to the 58 victims of a shooting at a country music concert in Las Vegas, but made no effort to toughen gun control laws. When Hurricane Maria crushed Puerto Rico, leaving half the island without power for months, Trump feuded with a local mayor and, during a visit, distributed paper towels to survivors by shooting them like they were basketballs.

Befitting a man whose reality show ended with a firing each week, in Trump’s first year his administration’s upper-level officials have had a turnover rate of 34 percent, much higher than any other in the past 40 years. Gone were chief of staff Reince Priebus, chief strategist Steve Bannon, press secretary Sean Spicer and, after just 11 eventful days, communications director Anthony Scaramucci.

But the circumstances of two exits above all may define not just Trump’s first year in office, but those to follow.

National security adviser Mike Flynn was fired less than a month into the term for lying to Vice President Mike Pence about his contacts with foreign officials. In May, Trump fired FBI Director James Comey, who had been leading the investigation into possible collusion between Trump’s campaign and Russian officials during the 2016 election.

That dismissal led to the appointment of special counsel Robert Mueller, whose probe into possible collusion and obstruction of justice has hovered over the White House. Flynn pleaded guilty to lying to FBI agents and is now cooperating with Mueller. Trump himself may at some point be interviewed.

“We’ve never had a president who had such a chaotic first year. Every day is topsy-turvy and disorganized, the country has not been so divided since the Civil War and Trump thrives at being the bull that carries his own china shop around with him,” said Douglas Brinkley, presidential historian at Rice University. “He’s not like anything we’ve seen before and this is the question: What are the consequences going to be?”