Interstate 10 west from Mahan Drive has been opened after most of the state highway was closed Wednesday morning during a winter ice storm.

Closures remain to the east to Live Oak, according to the Florida Highway Patrol.

“We have sunny skies and temperatures above freezing so I’m not expecting any more closures,” Peters said.

“It kept us busy. It was a busy start to the New Year,” he said. “Ice and snow is not a normal thing in Southeast, especially in Tallahassee, so it forced us to come up with a new battle rhythm for the Emergency Operations Center.”

The Florida Highway Patrol has boosted its manpower on Interstate 10 after closing the road from Live Oak to Tallahassee during a blustery winter storm this morning. 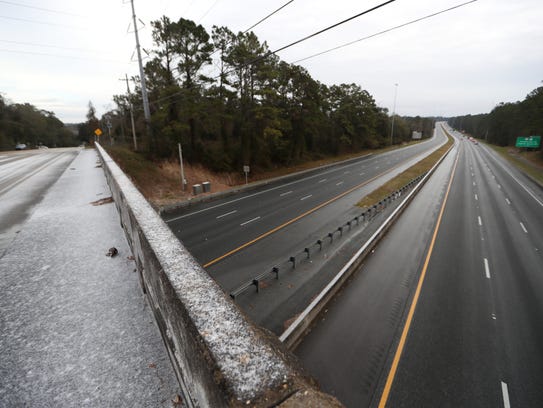 Buy PhotoInterstate 10 is shut down between the Thomasville Road exit in Tallahassee and Live Oak as a mix of freezing rain, sleet and light snow hits the Big Bend on Wednesday, January 3, 2018. (Photo: Joe Rondone/Democrat)

Eastbound traffic has thinned significantly, said FHP Lt. Patrick Riordan, however, vehicles coming from the west are starting to back up just outside of Live Oak.

Vehicles are being diverted at exit 129 in Live Oak, just to the west of the Interstate 75 exchange. Riordan said motorists would be diverted to U.S. Highway 90 if they wish to continue west.

Most of I-10 cutting through the Big Bend was closed Thursday morning due to icy conditions. Interstate 75 remains open.

Riordan said troopers were being pulled from administrative positions onto the road to assist. Officials are monitoring weather conditions to determine when to reopen I-10.

“We’ve been watching the projections the last couple days and we’re trying to do the best we can,” Riordan said. “We don’t want to keep the interstate closed down any longer than we absolutely have to.”

The following roads are closed in the Tallahassee area. Updates can be found at talgov.com

The National Weather Service says wintry precipitation is tapering off in Tallahassee. But eastern parts of the Big Bend and North Florida are still seeing steady freezing rain, sleet and snow.

Tallahassee was seeing a relatively rare mix of light snow, sleet and freezing rain this morning, making for potentially dangerous road conditions during the morning commute.

A large portion of Interstate 10 in North Florida — from Thomasville Road in Tallahassee to State Road 53 in Madison County — was shut down because of ice, according to the Florida Highway Patrol. The flyover at Thomasville Road and U.S. Highway 90 east at Sunray Road near Lake Miccosukee also were closed.

One crash was reported this morning on the flyover in Tallahassee, said Kevin Peters, director of Leon County Emergency Management. Details were not available.

Peters said city and county crews spread sand on roads to mitigate the iciness. He urged drivers to be extra careful.

“We do advise travelers to use extreme caution out there today,” he said. “Anticipate stops you’re going to need to make. Be careful out there. It’s slippery. Take that extra time.”