Deadly Cold Grips Much of US

Bone-chilling cold gripped much of the U.S. as 2018 began, breaking century-old records and leading to several deaths that authorities attributed to exposure to the dangerously low temperatures.

The National Weather Service issued wind chill advisories and freeze warnings Tuesday covering a vast area from South Texas to Canada and from Montana through New England. Authorities opened warming shelters in the South as temperatures dipped notably close to zero in Alabama and Georgia.

The bitter cold wave enveloped much of the Midwest on Monday, yet that didn’t deter hundreds of people from ringing in the new year by jumping into Lake Michigan. Throngs of people took part in the Polar Plunge in Milwaukee, despite sub-freezing temperatures and a warning of potential hypothermia from the local fire chief. Organizers canceled a similar event on the Chicago lakefront, after the temperature there dipped below zero and thick white steam rose from the lake. Organizers said the arctic blast made jumping into the lake too dangerous. An annual New Year’s Day water ski show on Pigeon Lake in western Michigan was canceled for the first time since the event was launched in 1980 because the water was frozen solid.

Temperatures plunged below zero elsewhere in the Midwest, including in Aberdeen, South Dakota, where the mercury dropped to a record-breaking minus 32 (-36 Celsius). The city’s previous New Year’s Day record had stood for 99 years.

It was colder in Des Moines, Iowa, where city officials closed a downtown outdoor ice skating plaza and said it wouldn’t reopen until the city emerged from sub-zero temperatures. The temperature hit 20 below zero (-29 Celsius) early Monday, with the wind chill dipping to negative 31 degrees (-35 Celsius).

The weather service said temperatures in Indianapolis early Tuesday tied a record low of minus 12 degrees Fahrenheit (minus 24 degrees Celsius) for Jan. 2 set in 1887. Indianapolis Public Schools canceled classes for Tuesday on all its campuses due to the predicted sub-zero temperatures. Students had been scheduled to return from winter break.

In northeastern Montana, the wind chill readings dipped as low as minus 58 (-50 Celsius). And in Duluth, Minnesota, a city known for its bitter cold winters, the wind chill dipped to 36 below zero (-38 Celsius). 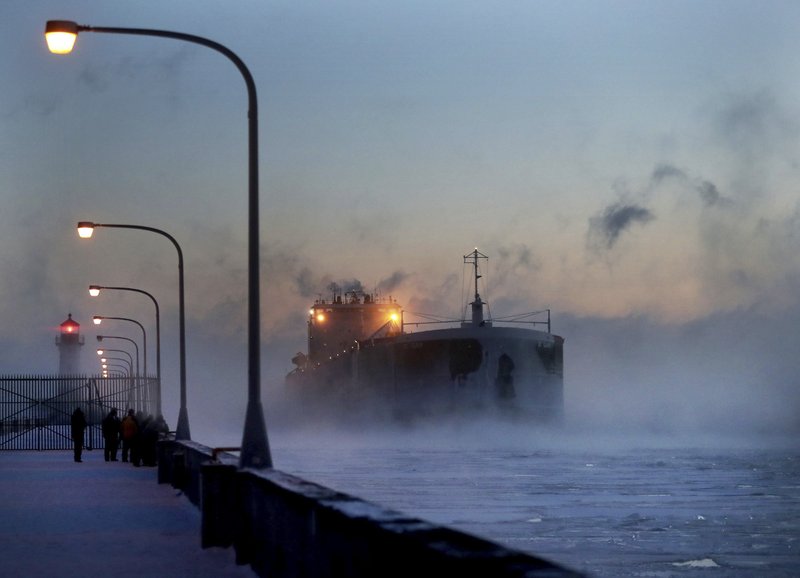 The ship St. Clair comes to harbor on Lake Superior in Minnesota during some of the coldest temps of the year, Sunday, Dec. 31, 2017. (David Joles/Star Tribune via AP)

Plunging overnight temperatures in Texas brought rare snow flurries as far south as Austin, and accidents racked up on icy roads across the state. In the central Texas city of Abilene, the local police chief said more than three dozen vehicle crashes were reported in 24 hours.

It’s even cold in the Deep South, as temperatures plummeted early Tuesday to 14 (-10 Celsius) in Atlanta and 26 (-3 Celsius) as far south as New Orleans. Temperatures fell to 8 degrees near Cullman, Alabama, and 20 degrees in Mobile, Alabama. Georgia saw one of its coldest temperatures of the winter: 2 degrees shortly before dawn at a U.S. Forest Service weather station at Toccoa, Georgia. Warming shelters were opened across the South as freeze watches and warnings blanketed the region, including hard freeze warnings for much of Louisiana, Mississippi and Alabama. 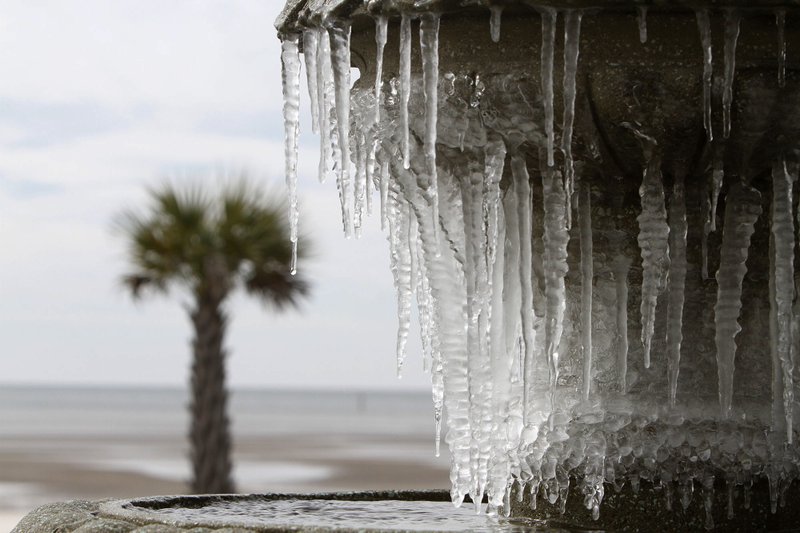 The cold is blamed in at least nine deaths in the past week. Most recently, police in St. Louis said a homeless man found dead inside a trash bin Monday evening apparently froze to death as the temperature dropped to negative 6 degrees (-21 Celsius). Sheriff’s officials in Fond du Lac County, Wisconsin, said a 27-year-old woman whose body was found Monday evening on the shore of Lake Winnebago likely died of exposure.

The Milwaukee County Medical Examiner’s Office said two men whose bodies were found Sunday showed signs of hypothermia. Police believe the cold weather also may have been a factor in the death of a man in Bismarck, North Dakota, whose body was found near a river.