This is a story about a future president who tried to drain a swamp, and government workers who are making it wet again.

By returning the habitat to its natural state, they just might keep the Great Dismal Swamp from heating up the planet.

It was a young George Washington, working as a surveyor 254 years ago, who saw profits in the wetlands straddling the Virginia-North Carolina border. 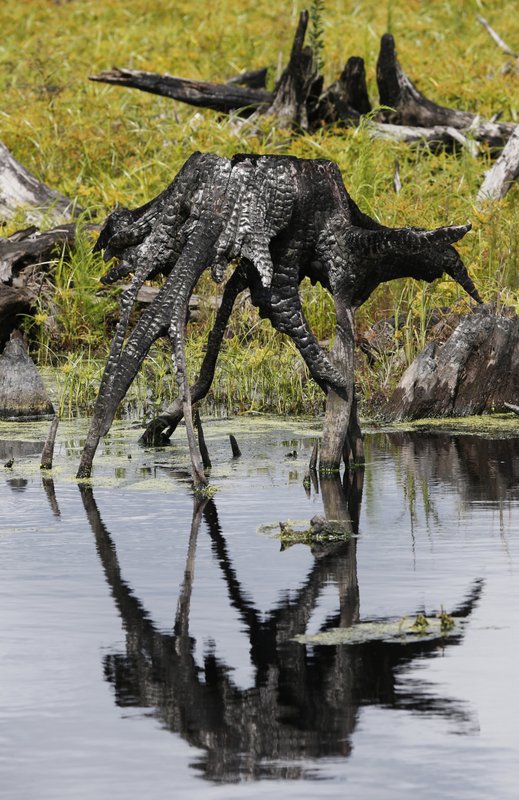 George Washington’s slaves started logging it, 254 years ago. Now much of the cypress and cedar is gone. (AP Photo/Steve Helber)

The seemingly impenetrable swamp had been dismissed as a deadly morass where explorers vanished and runaway slaves escaped. Today, scientists have discovered that the swamp’s peat soil is a vital piece of the climate change puzzle, able to either contain or release a greenhouse gas that causes global warming.

Washington and his fellow investors had slaves dig a ditch to drain the spongy peat soil and log the cypress and cedar trees. Their rot-proof lumber was perfect for ship masts, roof shingles and fence posts.

Washington never drained the whole swamp, but loggers kept plundering it for generations thereafter, drying out the soil, altering the habitat and making it more vulnerable to wildfires. What’s left of it didn’t become a national wildlife refuge until 1974. 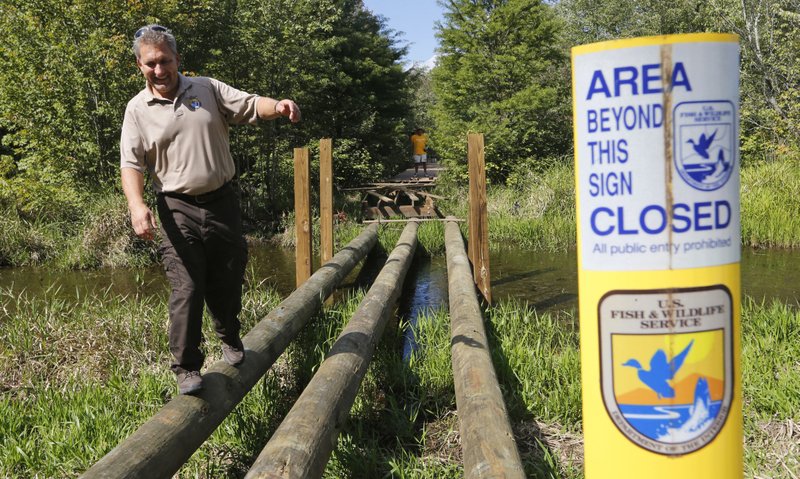 Refuge Manager Chris Lowie and volunteer Jim Seagraves look over construction of a walkway in the swamp. (AP Photo/Steve Helber)

Now the U.S. Fish and Wildlife Service is trying to undo the damage by gradually “rewetting” the swamp. Refuge manager Chris Lowie and his staff are slowly raising the water table in the swamp’s remaining 113,000 acres by capturing and rechanneling rainfall in the vast network of ditches that scar the land. Aluminum pipes and wooden boards now control water levels in about a third of the refuge.

Just how wet the Dismal should be, and where, could take years to determine. It will depend on future goals for wildlife, the refuge’s ultimate responsibility. For example, they could try to grow more native pines to support the precarious population of red-cockaded woodpeckers. They’re trying to take careful steps, and to avoid doing more harm to an altered landscape.

“It took 250 years to get to this point,” Lowie said. “Maybe it’s going to take another 50 to understand the swamp.” 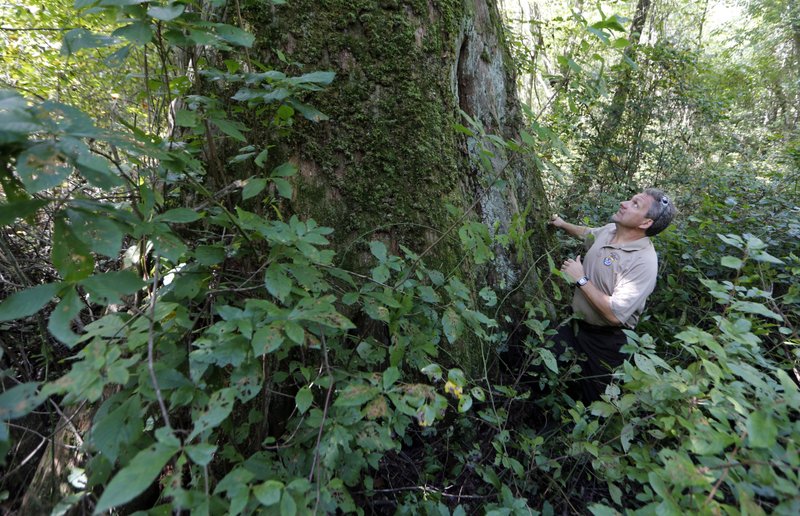 Peat soil consists of partially decomposed twigs, leaves and roots of plants that have accumulated in wet conditions over centuries. When this soil dries and is exposed to oxygen, microscopic organisms break down the peat into carbon dioxide and release the greenhouse gas.

“You simply put the lid back on the pot by rewetting,” said Hans Joosten, a professor who leads the Department of Peatland Studies and Palaeoecology at Greifswald University in Germany.

Peat fires are also a major concern, sending millions of tons of pollution into the atmosphere. According to the U.S. Geological Survey, the last two big fires at the Great Dismal Swamp released an estimated total of 6.2 million metric tons of carbon dioxide — more than the annual output of a million cars.

“What we’re learning is that we’re not alone in this,” said Lowie. “This is a worldwide issue.” 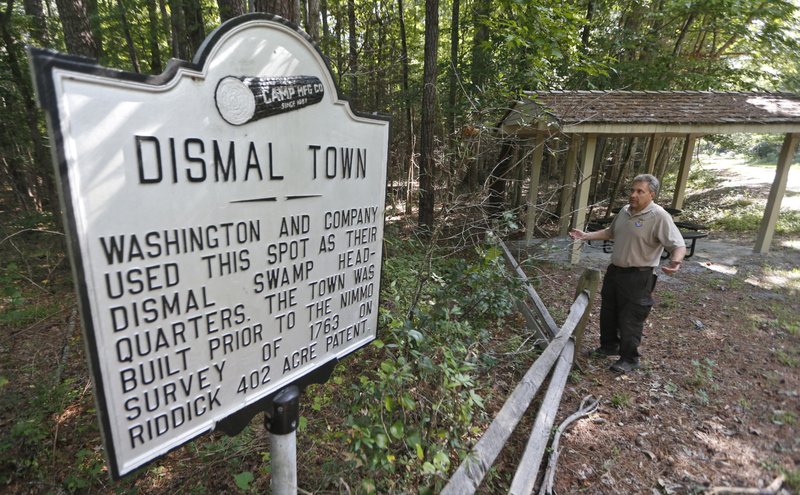 George Washington started it — the ditch-digging and logging that dried out most of the Great Dismal Swamp. (AP Photo/Steve Helber)

Judy Drexler, a USGS wetland ecologist who has studied the swamp, said rewetting should reduce the risk of fires, stop the peat soil from receding and enable it to store more carbon instead of leaking it.

Drexler said scientists have long known that peat bogs, when dried out, can contribute to global warming. But only relatively recently has the issue gained attention, partly because of the massive fires in places like Indonesia.

“It’s finally starting to get traction,” she said.

The Great Dismal Swamp was once ten times bigger than it is now, stretching for a million acres. In 1728, land surveyor William Byrd described its heart as a horrible desert that “no beast or bird approaches,” with woods so thick, “friendly beams of the sun can never penetrate them to warm the earth.”

Today, nearly 150 miles of ditches mar the landscape, but nature remains. Driving through the refuge recently, Lowie passed a black bear cub that scampered away in a blur. A bald eagle — part of another comeback story — soared above an open swath of shallow water and dead trees, left by a fire that raged for months in 2011.

The thick stands of cypress and cedar trees Washington spotted in the 1760s have mostly given way to trees that grow in drier conditions, such as red maple and gum. 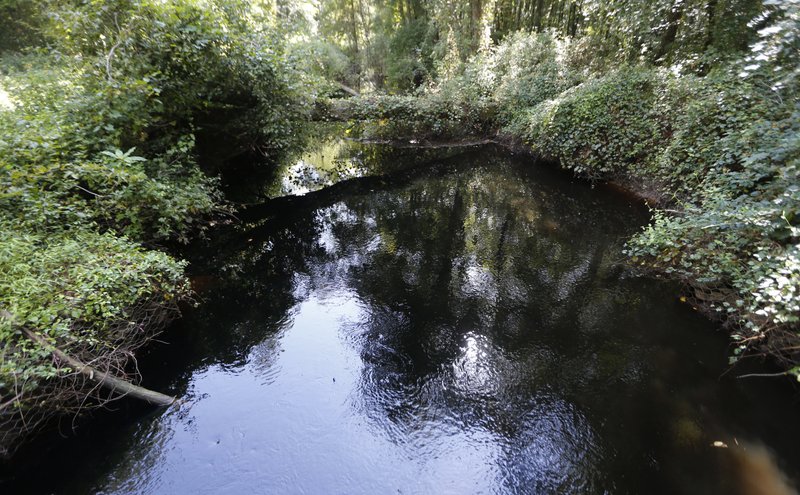 Still, the black peat soil is healthy where the refuge has managed to make it wet again. Lowie proves it by grabbing a dead tree branch and plunging it slowly down, nearly two feet into the moist soil.

“But I can say we’re doing great things,” he said. “Not just for the Great Dismal Swamp, but for the world.”